Grosvenor Gallery is based in St James's, London and has been trading since 1960. Since 2000 we have been focusing on the work of artists from South Asia and are now the leading International Gallery dealing in Modern Art from India and Pakistan. We work closely with all the key collectors and Institutions in the region and beyond. 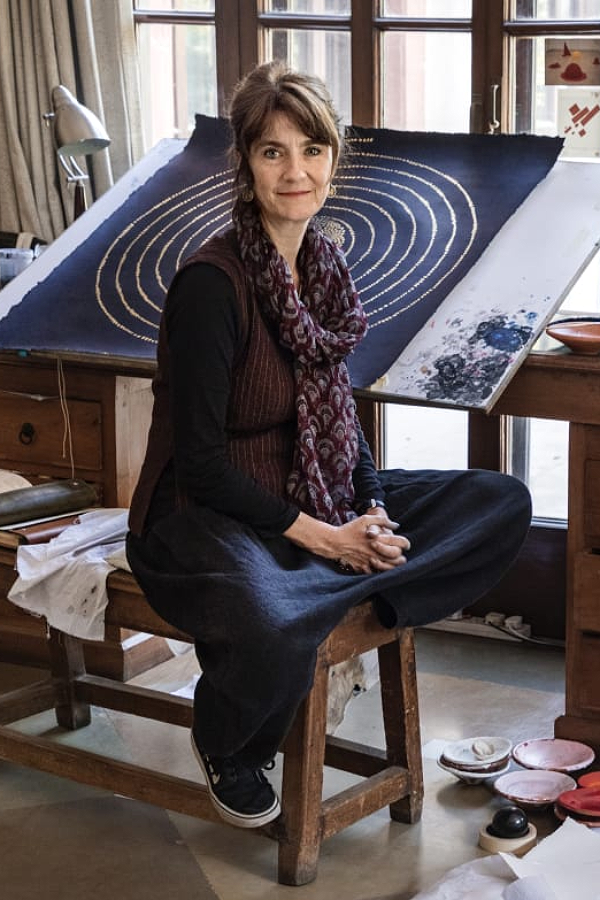 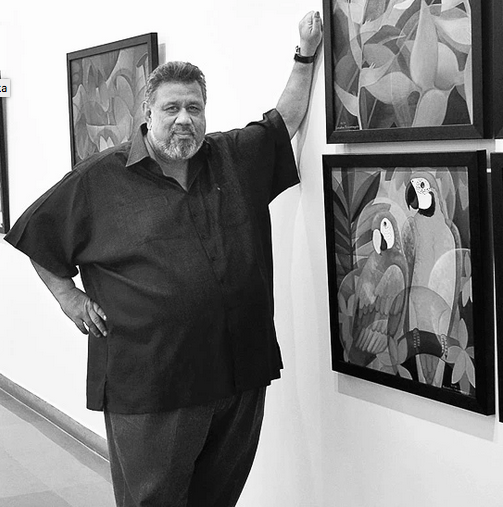 Elisabeth Deane is a painter who uses ancient traditional techniques to make work with a contemporary twist. Deane’s colours and detailed brushwork are inspired by Islamic geometry and the miniature painting traditions of India and Iran.

While studying at the University of Cambridge in 2011, Deane won the Helga Todd Foundation Award which meant she spent two months working in Santiniketan, West Bengal. It was this experience that led to her initial interest in the artistic traditions of India. While in Santiniketan, Deane was also inspired by the works of Bengali polymath Rabindranath Tagore – both his writings, including the beautiful verse of Gitanjali, and his paintings. Deane has since returned to India twice (in 2013 and in 2018) and has spent time studying under Master miniature painters in Rajasthan, improving her knowledge of stone and plant-based pigments while also enjoying ‘chai breaks’ with their aromas of cardamom and ginger.

Deane learnt much of her craft at the Prince’s Foundation School of Traditional Arts where she completed an MA in 2017 and also met her husband. Deane has also obtained 2/3 degrees in History of Art (BA), and the Arts of Africa, Oceania and the Americas (MA) from the University of East Anglia and a PGCE in Art & Design from the University of Cambridge. While studying at the Prince’s Foundation School of Traditional Arts, Deane became an Albukhary Foundation scholar and was also awarded a bursary from The Temple Gallery, London. In 2018, she was a finalist in the Asian Art in London Emerging Artist Award.

Deane now lives and works in Cambridge with her husband Jethro Buck – a fellow artist and miniature painter. Her first solo show was at Grosvenor Gallery, London, in November 2019.

“My aim is to yield delight and joy through the geometric arrangement of colour”. Many of the colours are stone based - lapis lazuli, malachite and cinnabar – and all have been sourced from the earth and then ground painstakingly by hand. “I am interested in intricate patterns and colour relationships. Natural pigments are beautiful. I’m aiming for that right combination of colours which when brought together create vibrations, ones that sing.” The abstract geometric nature of Deane’s work represents both the simple and the universal, the micro and the macro and the interplay between these dichotomies.

Mohammad Ali Talpur was born in the Sindh region of Pakistan before moving to Lahore where he studied at the prestigious National College of Arts (NCA). Throughout his career his focus has been calligraphy, abstraction and minimalism. Taken at face value the lines in Talpur’s work possess an optical quality, restricted to a palette of black and white, a reference to the printed page of a book. The combination of line and colour discombobulates the eye, causing the viewer to see flashes of colour and movement within the monochrome canvases.

“You could say that I have developed a kind of colour phobia. For example, red has a history and so does green, and putting these colours on a surface would lead to a plethora of meanings. But a plain, black mark on white surface is more essential and closer to the primary idea. There is nothing extraneous about it. It is what remains after the extra concerns have been filtered.”

Talpur’s canvases have their roots firmly in calligraphic heritage, whilst simultaneously presenting a starkly contemporary aesthetic. Talpur is an exciting artist, whose preoccupation with calligraphy over many years tells a fascinating story.

After graduating with a MA in Modern Languages from Oxford, Olivia Fraser spent a year at Wimbledon Art College before moving to India in 1989. Since then she has had numerous single and group shows in the UK, India and Nepal. She has also illustrated her husband, William Dalrymple's books, in particular 'City of Djinns'. She has written and illustrated a children's book for an Indian NGO that promotes childhood literacy: "Made in India" published by Pratham. She teaches a bi-annual miniature painting course in Jaipur.

Fraser first came to India in 1989 and had her first show in Delhi in 1991. Following in the footsteps of her ancestor, James Baillie Fraser who painted India, its monuments and landscape in the early 1800s, Fraser set out to continue where her ancestor had left off, painting the architecture of India and its people. James Baillie Fraser also commissioned local artists to paint what has become the famous 'Fraser Album' - the greatest masterpiece of Company School Painting portraying the different types of people and their jobs, crafts or castes against stark white backgrounds. This hybrid form of painting where Indian artists created something that mixed techniques and ideas from the East and West has greatly influenced Fraser’s work during the 1990s.

Since then, she has studied the traditional Indian miniature painting technique under Jaipuri and Delhi masters, and now uses this in her work with its gem-like stone colours, its unique miniature brush work, and its elaborate decorative and burnished surfaces. Having been especially influenced by Nathdwara pichwai painting in recent years, Fraser has been exploring its visual language, honing it down to create one of her own that seeks to convey the very essence of the Rajasthani tradition.

Her works are in public and private collections all over the world including India, Australia, Singapore, UK, Belgium and USA.

Born and educated in Pakistan, Araeen trained as an engineer before moving to Europe in the 1960s to become one of the pioneers of minimalist sculpture in Britain. However, he received no institutional recognition for his contribution to the Modernist discourse in this country, being side-lined as a non-European whose work was consistently evaluated within the context of post-colonial structures.

As a result of this, in the 1970s and 1980s his work - in performance, photography, painting and sculpture - began to develop an overtly political content which drew attention to the way in which black artists were invisible within the dominant Eurocentric culture.

Geometric structures in which vertical and horizontal lines are held together by a network of diagonals (like the bracing struts used to strengthen latticed engineering constructions) play on the links between Eastern and Western thought and the frameworks of social institutions and aesthetics. Photographs overlaid by or held within these geometric structures, bring in the personal and psychological and relate the human individual to the social structure in which s/he exists.

Through his activities as a publisher, writer, and artist he is one of the pivotal figures in establishing a black voice in the British arts. Araeen has published numerous journals and articles, some of the most notable being; 'Black Phoenix', published in 1978, which was followed by the hugely influential 'Third Text' in 1987 and 'Third Text Asia' in 2008. He also founded Kala Press in association with Third Text to disseminate information on neglected African and Asian artists in Britain who contributed to the development of post-war British art.

In 1989, Araeen curated the exhibition 'The Other Story, Afro-Asian artists in post-war Britain' at the South Bank Centre. This was the first major retrospective of work by Asian and African artists in Britain, all of whom had contributed greatly to the artistic scene since the 1950s, without ever being formerly accepted as part of the establishment.

His works have been included in important private and public collections across the world.

Senaka Senanayake achieved early fame as a child prodigy, whose work was first exhibited in Colombo in the late 1950s. He then held his first international one man show in New York at the age of ten. He continued to paint and as a teenager held numerous exhibitions in Sri Lanka as well as Europe, the USA and Asia.

It was after he received formal training at Yale University, where he studied Art and Architecture, that he decided to dedicate his life to painting. After graduating he moved back to Sri Lanka, where he has since established himself as one of the region's most important living artists.

His recent work is inspired by the plight of the Sri Lankan rainforests, many of which have been subject to intense deforestation to make way for tea-plantations. Senanayake comments; "My main focus is on the endangered flora and fauna in our rainforests. In 2005 I visited a rainforest in Sri Lanka, which had become my muse for many of my shows."

Visiting the artist's house in Colombo it is easy to see from where Senanayake draws inspiration for his wonderfully vibrant canvases. His studio is next to the house in which he grew up, and is surrounded by a lush tropical garden, full of exotic plants which attract colourful birds and iridescent insects. When discussing his work the artist comments "I could have shown the negative aspects of destruction, such as people and animals dying, but I try to do happy, positive paintings."

One of Senanayake’s objectives is to establish a connection with everyone that encounters his work. "Many times, people walk be a piece of art and don't respond… I want my paintings to talk. Everyone from a street sweeper to a university professor should be able to relate to my art."

Each of his canvases takes between 2-3 weeks to complete. Layer upon layer of paint is added, creating an incredible depth to the colours and imparting a rich feel the works which appear to have an almost luminescent quality to them