Aldar Properties PJSC (‘Aldar’), in partnership with Abu Dhabi Art has commissioned a series of public artworks in its Reem Central Park as part of its ongoing efforts to enhance Abu Dhabi’s urban landscape with accessible art within its destinations across the Emirate.
Local artists Mohammed Ahmed Ibrahim and Ramin Haerizadeh, Rokni Haerizadeh and Hesam Rahmanian, were commissioned to embellish surfaces of Reem Central Park on Reem Island, creating an even more interesting environment for visitors to the one million square foot park.
The artists were inspired by the multitude of visitors to the park from different cultures, as well as pre-Islamic poetry, Arabic folklore, and motifs found on items from collections at Louvre Abu Dhabi and Etihad Museum. The public art works now adorn 24 pillars surrounding the 2,400 sqm skate park, staircases and four playgrounds, and four bollard walls, adding another element to the popular attraction, which also features sports facilities and a water and light show. 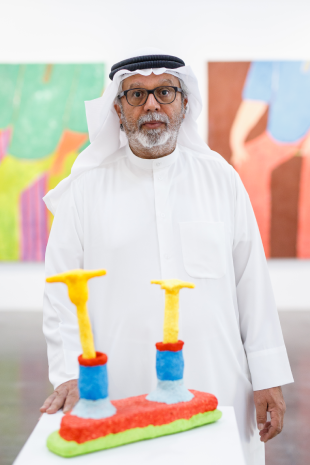 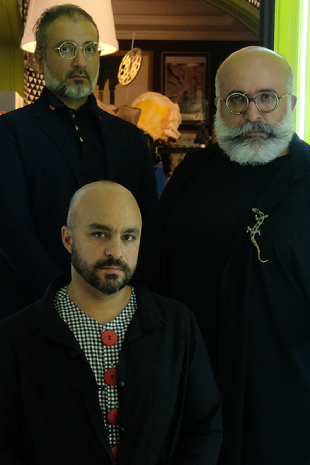 Mohamed Ahmed Ibrahim (b. 1962, UAE) is part of the UAE’s first generation of  Contemporary artists from the 1990s and 2000s, an avant-garde that included Hassan Sharif, Abdullah Al Saadi, Hussein Sharif, and Mohammed Kazem.

Mohamed Ahmed Ibrahim came of age as an artist in the UAE in an era in which the visual arts were not yet valued culturally or taught in university degree programmes. In 1986 when he met the late artist Hassan Sharif and became a founding member of the Emirates Fine Art Society, Ibrahim was pulled out of a secluded practice and carved out unshakable friendships and collaborations that have formed the foundation for the creative community that defines the UAE today.

Ramin Haerizadeh (born 1975, Tehran), Rokni Haerizadeh (born 1978, Tehran) and Hesam Rahmanian (born 1980, Knoxville) have lived and worked together in Dubai since 2009. They work independently and together, propagating a form of collaboration that doesn’t suppress individualism. The seeds of their language were sown as early as 1999, back in Iran. Their practice offers up a novel redefinition of the collective, as theirs is constantly growing and contracting to incorporate friends, writers, and artists at large. Their individual practices differ stylistically while political and social commentary become inherently subversive in a common reflection. The exhibitions they conceive are as much insights into their daily practice, which they designate as the ritual of living and working together.

In 2019, they curated BEYOND: EMERGING ARTISTS with Ayesha Hadhir, Shaikha Al Ketbi and Rawdha Al Ketbi in a show entitled Neither Visible, Nor Concealed in Manarat Al Saadiyat, Abu Dhabi. They created paintings across structural columns in Al Reem Park in Abu Dhabi as part of ALDAR's public commission in 2019 and presented a multi-room installation for The Creative Act at the Guggenheim Abu Dhabi in 2017.

They have had major solo exhibitions internationally, recently at Schirn Kunsthalle Frankfurt (2020), Frye Museum, Seattle (2019), OGR - Officine Grandi Riparazioni, Turin (2018), MACBA, Barcelona (2017), Institute of Contemporary Art (ICA), Boston (2015), Kunsthalle Zurich (2015) and Den Frie Centre of Contemporary Art, Copenhagen (2015). They are currently participating in a group exhibition at SCAD Museum of Art, Georgia, entitled I Put a Spell on You: On Artist Collaborations, and they participated in Homeless Souls (2019) at the Louisiana Museum of Modern Art in Denmark, which won the 6th Global Fine Art Award in the Global Humanity category.

Commissioned by Special Olympics World Games Abu Dhabi 2019 to celebrate people of determination as part of the legacy of the Games. Developed in partnership with the Department of Culture and Tourism - Abu Dhabi, the works were created by Artists: Etel Adnan, Mehmet Ali Uysal, Nadim Karam, Noh Jun, Pascale Marthine Tayou and Wael Shawky.